The Value Of Being Alone


A person who does not know how to use his mind productively will flee from the state of being alone. But when a person has learned how to think, he will greatly appreciate the moments when he is by himself, for then he will be able to utilize those moments for intellectual and spiritual growth. Sometimes not being in relationship has its advantages, as one has the opportunity  to value relationship and realize our true soul mate for our physical body is the one above.

During a quiet moment today, appreciate the value of being alone.

Rabbi David Bar-Hayim's Beth din published a groundbreaking psak halakha in 2007 allowing all Jews to consume kitniyot (legumes) on Passover. This year the rabbi was asked how he could publish such a ruling when great scholars of previous generations, such as the Vilna Gaon did not do so. Rabbi Bar-Hayim responds in the following video interview:

The Debate over Jewish Achievement

As a non-Jew, I'm fascinated that a people which constitute less than 1% of the world's population has made such enormous contributions to humanity.

Musical, magical, colorful, cooling and full of splash, fountains throughout Israel are a delight for visitors.

The Bellagio in Las Vegas, Italy's Trevi, Singapore's Fountain of Wealth and Austria's Swarovski Crystal Head Fountain are among the best known water-spouting attractions around the world.

Most major cities maintain at least one artistic fountain to show off the country's architecture and originality. Tourists flock to see the unique designs, enjoy a sound-light-water show or take a selfie against the special backdrop.

There are dozens of fountains across Israel — some small, some flashy, some historical, some enormous, but all making a splash on outdoor creativity. ISRAEL21 recommends these 10 must-see fountains. 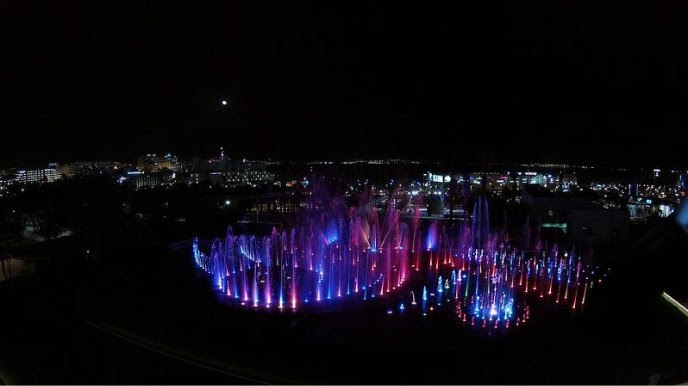 The biggest fountain in Israel — spread over 1,500 meters, with 400 colored LED lights and 350 jets spraying as high as 30 meters – was unveiled beside the skate park in Eilat, Israel's southern resort city, on May 26.

Locals got a taste of what's to come during an Independence Day pilot that showed the Musical Fountain's six-minute audio-visual spectacle set to take place every Tuesday, Thursday, Friday and Saturday at 8, 9 and 10pm.

"This unique fountain is the largest in Israel, similar to those in leading cities such as Barcelona, Las Vegas and Prague. Projects of this nature serve as a magnet for tourists and we hope that this fountain will indeed be a tourist gem and a focus for visitors and tourists," Tourism Minister Uzi Landau tells ISRAEL21c. 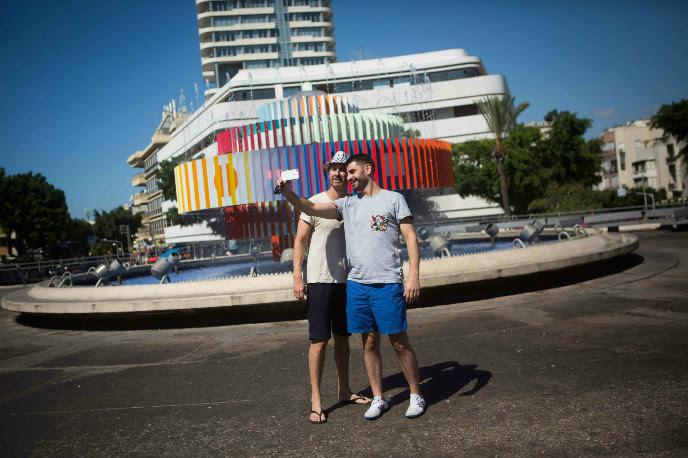 The Fire & Water Fountain was installed in 1986 and has since become a Tel Aviv landmark. The kinetic and colorful sculpture is the work of Israeli artist Yaacov Agam, who agreed to donate his unique piece to the city.

"The fire and water together in the sculpture recreates the dynamic elements of time and change," artist Ron Agam, Yaacov's son, explained. "The most important element of this artwork is its celebration of life, the most constant thing in life is change and everything is always in movement."

As successful outdoor artworks should do, this fountain attracts locals and tourists to its side. The fountain sprays water, spurts fire and plays music four times a day – at 11am, 1pm, 7pm and 9pm. 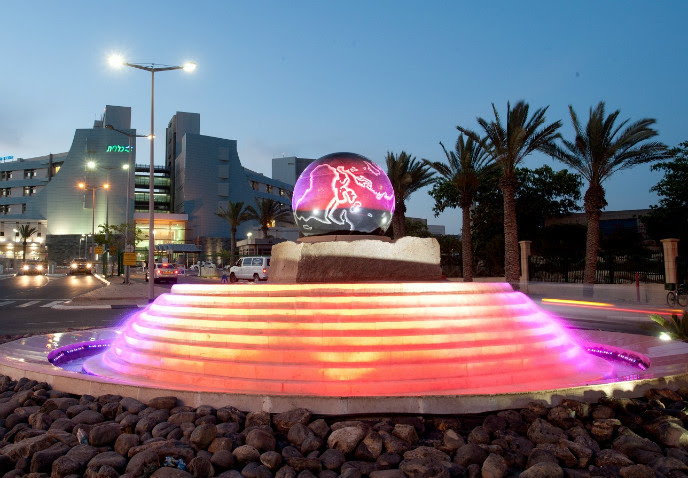 Globe Fountain: Is it the most beautiful one in Beersheva?

Beersheva may be in the desert, but the southern municipality is home to more than 30 outdoor water installations including fountains, waterfalls and public garden pools – all replete with colorful lighting. The city offers a self-guided water fountain walking tour, recommended for evenings.

City residents cheered on Mayor Rubik Danilovich as his 2011 plan for light-water shows throughout the city took root. The one sore point: No one agrees which fountain is best.

The Globe Fountain, located opposite Soroka Medical Center, has a spinning globe at its center that glows with cool designs at night.

Is it more beautiful than the Mosaic Fountain on Jabotinsky Street, the Cloud Fountain on Naphtali Herz Imber Boulevard, the ever popular Colleges Fountain opposite the Sami Shamoon College of Engineering? You be the judge. 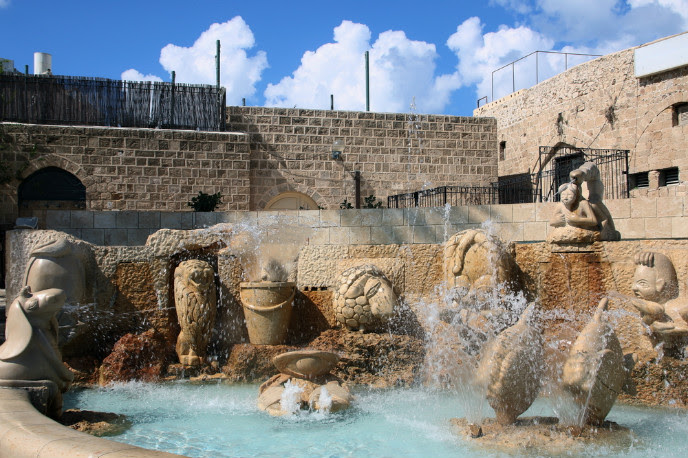 This is the place to come and toss a coin and make a wish. The Zodiac Fountain in Kdumim Square is comprised of chalkstone sculptures of the 12 zodiac signs. It was designed and sculpted by Jaffa resident artists Varda Ghivoly and Ilan Gelber in 2011 at a location where a legendary magical wishing well once stood.

Ancient zodiac imagery has been unearthed by archaeologists in Israel over the years. And the Old City of Jaffa is teeming with references to this astrological theme. There's a bridge that connects Peak Park to Kdumim Square with zodiac-themed plaques, and a stone mosaic of the zodiac signs at the entrance to the bridge. And many of Jaffa's streets are named for zodiac symbols. A combination of a musical fountain and splash fountain, this public art space opened in 2013 and immediately became a gathering spot for locals and foreigners alike. Located across from Mamilla and the Old City walls, Teddy Fountain is named in honor of Jerusalem's long-serving former mayor, Teddy Kollek.

During the day, children run and splash through the water jets. In the evenings, a sound-music-light show wows the crowds every half hour. The fountain was designed by Stéphane Llorca and the music was composed by the New Jerusalem Orchestra. 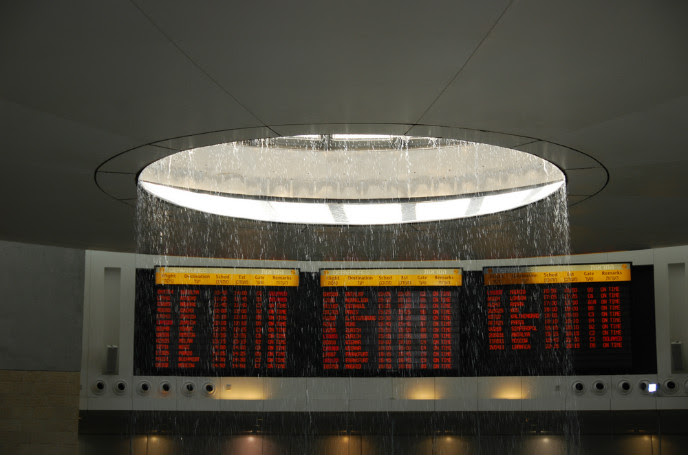 This fountain is a central feature of Terminal 3. Photo via Shutterstock.com

Public art is meant to be seen and enjoyed by as many people as possible. So it makes sense that many airports feature sculptures, paintings and interactive displays in their departure and arrival areas.

The innovative fountain at Ben-Gurion International Airport, Terminal 3 duty-free area, is an incredible sight to see. The water changes colors and drops from the ceiling while making shapes including Israeli flags, hearts, stars and even words, including "Israel" and "peace" in Hebrew and English, as they fall into a fountain.

The amazing water art was created by the local company Watershows.

The Municipality of Netanya recently upgraded its main city square — Atzmaut Square — with advanced technology systems. One of the new projects was an Artistic Fountain that would serve as a public art piece as well as a splash pad. 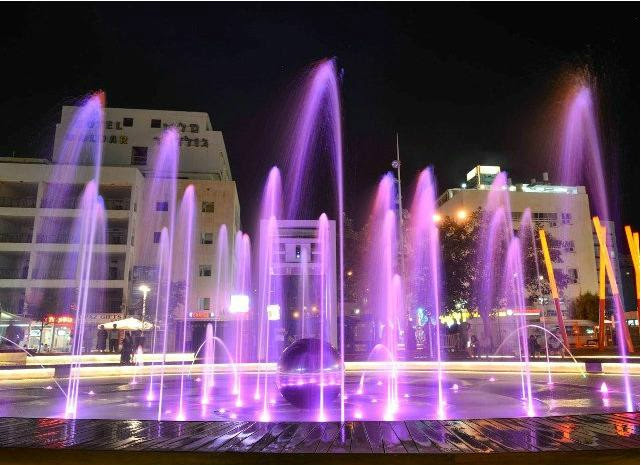 There's a huge metal ball at the center of the fountain that sprays out water. A hidden water screen just above the ball catches the colorful light beams and forms shapes and pictures. In the evenings, the fountain plays music synchronized with the lights and water jets.

During the days, this water fountain serves as a splash pad for kids. Inspired by the Magic Fountain in Barcelona, the Musical Fountain (sharing a name with Eilat's new attraction) is on a manmade lake in the Ashdod Sea Park and comes to life after dark.

Six evenings a week, you can take a selfie against this unique backdrop and then sit around the lake and enjoy the dancing water jets, colored light strobes and synchronized music. 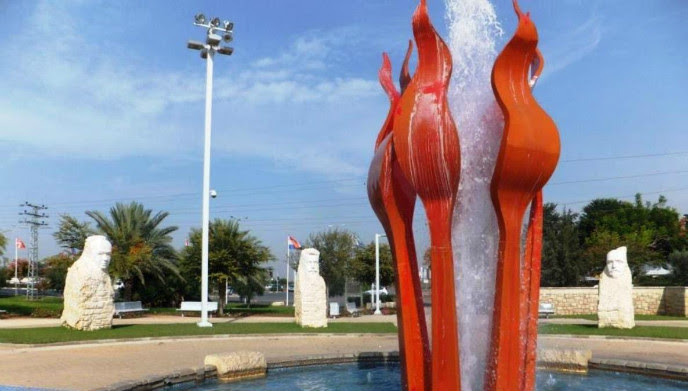 The fountain at Leaders Garden doesn't wow visitors with lights or music. But it's packed with history, as it sits in the center of the garden's outdoor museum, surrounded by sculptures of some of the nation's leaders.

Rishon LeZion actually boasts 31 fountains and water sculptures around the city. Children love the Aleph Bet Fountain splash area in the Gan Be'Ivrit (Hebrew Park). The municipality had the idea of combing fun with a dash of learning; kids can run from letter to letter while getting splashed by the unpredictable jets and streams of water. 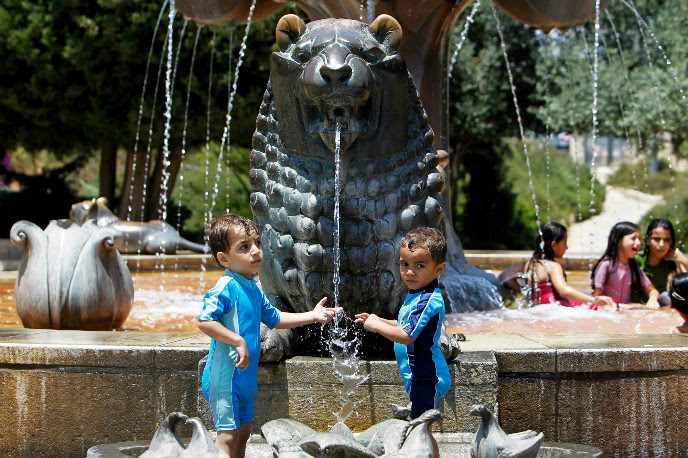 The Lions Fountain in Bloomfield Park in Jerusalem is a city landmark. It was designed by German artist Gernot Rampf and was given to the capital as a gift from West Germany in 1989, making it Jerusalem's first fountain.

The municipal emblem features the "Lion of Judah," and Rampf wanted to convey the historical and cultural aspects of the city in his design. Other symbols in the structure include a tree at the fountain's center with three branches representing the three major religions of Jerusalem; seven water flows symbolizing one of the most significant numbers in the Bible; and sculptures of doves, mice and other lions illustrate coexistence and the desire for peace.

In summertime, families congregate around the picturesque fountain. And though it's not meant to be a public splash area, you can always find kids playing in the cool water on a hot day.

Other fun fountains to visit in Israel:

Viva Sarah Press is an associate editor and writer at ISRAEL21c. She has extensive experience in reporting/editing in the print, online and broadcast fields. Her work has been published by international media outlets including Israel Television, CNN, Reuters, The Jerusalem Post and Time Out.
View all stories by Viva Sarah Press →

or http://www.yehudalave.com/
Posted by Rabbi Yehuda Lave at 2:18 PM