A person who spent a lot of time and effort to express gratitude to soldiers was challenged, "But ultimately it is G-d who protects us. Why are you so grateful to these individuals?"

"If someone goes out of his way to help you financially when you need it, are you grateful?" he asked that person.

"But isn't G-d the ultimate source of the money you get?" he asked.

"Yes. But I still have an obligation to be grateful to the people who are kind to me."

Love yehuda lave
A holy man was  having a conversation with God one day and said,
' God , I would like to know what Heaven and Hell are like.'

He opened one of the doors and the holy man looked in.

The people sitting around the table were thin and sickly. They appeared to be famished.

They were holding  spoons with very long handles, that were strapped to their arms and each found it impossible to reach into the pot of stew and take a spoonful.

But  because the handle was longer than their arms, they could not get the spoons back into their mouths.

The holy man shuddered at the sight of their misery and suffering.

They went to the next room and opened the door. It was exactly the same as the  first one.

There was  the large round table with the large pot of stew which made the holy man's mouth water.

The people  were equipped with the same long-handled spoons, but  here  the people  were well nourished and plump, laughing and talking. The holy man  said, 'I don't understand..'

'It is simple,' said God . 'It requires but one skill.

You see  they have learned to feed each other, while the greedy think only  of themselves.'

An American Trapped in the 1948 Siege of Jerusalem Volunteers and Haganah members evacuate a man wounded by the Egyptian bombardment of Tel Aviv during the 1948 War of Independence. Photo: State of Israel National Photo Collection.

JNS.org – "We are so used to bombs and the sound of firing guns that we don't get upset anymore."

In choosing those words, Florence Bar Ilan probably hoped to convey that there was a certain stability to her daily life, but one can imagine her parents, Rachel and Samuel Ribakove, back in the Williamsburg section of Brooklyn, trembling as they read the letter their daughter sent from besieged Jerusalem during Israel's 1948 War of Independence.

"Dear Florence, Dear Mother and Dad," a collection of letters between Florence and her American relatives from the 1930s through the 1960s, has been published by family members ahead of Yom Yerushalayim (Jerusalem Day) 2015, which falls on May 17. The collection is not only a way to document the family's legacy, but also provides scholars, students, and the general public with a remarkable eyewitness account of an American immigrant's life in Israel, including a riveting description of daily life during the 1948 siege of Jerusalem.

During the 1930s and 1940s, the correspondence between Florence and her parents and siblings back in Brooklyn was largely devoted to the challenges of young motherhood and other family concerns. Well into 1947, Florence's letters reflected an ordinary daily life dominated by the routine concerns of a young homemaker­children's needs, laundry schedules, preparation of meals.

But as Arab violence intensified, Florence's letters began reflecting the growing tension. "There is practically no danger if you are indoors," Florence assured her parents in July 1947, "so we try to avoid being in the streets. We've had a stray bullet on the balcony again and splinters in my father-in-law's bedroom but no one was in the room and a miss is as good as a mile." There were also the beginnings of food shortages. In one letter, Florence described the extra efforts she had to make to procure some beef since, "After all, we can't live on chicken all the time." Those words would come back to haunt her.

A reader cannot help but share Florence's elation as she recounts street scenes in Jerusalem following the United Nations vote on partitioning Palestine into Jewish and Arab states. "The city was wild today," she wrote. "Youngsters climbed on trucks and buses and went through the streets singing and shouting, 'A Jewish State­free immigration!' Whenever you met anyone you knew the greeting was 'Mazel tov'… I never knew there were so many people in Jerusalem!"

By early 1948, the mood had changed drastically. Constant Arab attacks on the Tel Aviv-Jerusalem road made it increasingly difficult for vehicles carrying food or medicine to reach the Holy City. With each passing day, Jerusalemites felt the ever-harsher grip of the siege. The days of "chicken all the time" gave way to "Some days I can't get chicken or fish for the children…My grocer now gives me one egg per person a week." The temperature in their house rarely reached 50 degrees, "and the children have woolen socks and underwear and in the house, I too wear woolen anklets," Florence wrote. They had hot water only a few times each week, because, like most families, they did not have enough kerosene to heat more. Baths, even for the children, became a rarity.

Violence intensified within the city, as well. On Ben-Yehuda Street, close to where the Bar Ilans lived, Arab bombs shattered numerous windows, but shopkeepers were reluctant to replace them because "who knows how soon they'll have to put in new glass" again. Gunfire became so frequent that "most Jerusalemites can distinguish the different sounds made by different guns." Among the victims of a March 12 attack on Jewish Agency headquarters was Toby's cousin, Mrs. Michal Raami-Berlin.

One is hardly surprised to read a letter from Florence's sister Gertrude suggesting, "sending Naama (the Bar Ilans' 2-year-old daughter) and Naphtali (their 5-year-old son) to us for an indefinite period." But Florence and Toby would not hear of it. "We're in this up to our necks and there is no going back… Like all the other Jews in Palestine we know we must make a stand here," Florence wrote.

Florence gamely tried to put a positive spin on the details of the worsening siege. Sure, they were eating mostly cold food from cans, she acknowledged in one letter­but at least they did not need to use up their remaining kerosene to heat it. "We live in a purely Jewish district and feel quite safe," Florence reassured her parents, only to mention, just two sentences later, that she had not yet picked up a package from Gertrude that had been waiting her for at the local post office, because "there is sniping around there."

Not seeing a tomato or an egg for weeks at a time, or not being able to take a bath or do laundry, soon seemed like trivial hardships, when the birth of the State of Israel, in May, was greeted with a full-scale invasion by Arab armies. "We are cut off from the world," Florence wrote on May 16. "Telephone lines are down outside of town and there is no electricity…. Naturally, the refrigerator isn't working and we can't cook for we have no other means at present except an electric plate… To add to our difficulties, there's no water in our neighborhood."

Remarkably, none of this seemed to faze the children. "We are pretty nimble at snatching the children and running" to the bomb shelters, Florence reported, in a scene that sounds terrifying but which her young son and daughter treated as some kind of game. When the children of Toby's murdered cousin needed to move in to the Bar Ilans' already cramped apartment, Naphtali and Naama were delighted to have additional playmates. Florence was horrified to find bullet holes in the sheets drying on her porch and bullet casings scattered about, but "this was a great treasure for Naphtali, for he like most other children now have collections of empty cartridge cases and spent bullets," she wrote.

Spring gave way to the "murderous heat" of the summer, which was made all the more insufferable by a severe water shortage­three pails per family per day. "We've gotten used to no electricity, no kerosene, no fruit or vegetables, no meat, fish or eggs," Florence wrote. "But now the hardest is the water shortage."

A series of Israeli military victories during the summer finally broke the siege and secured the freedom of western Jerusalem. An unstinting commitment to the Zionist dream had sustained this young American housewife and her Israeli husband, and their fellow Jerusalemites, through the darkest of days. "These deprivations mean little when we think of those who have died in the battle of Jerusalem," Florence wrote. "We have high hopes. Not that we forget the sacrifices our State has cost and will cost but we believe that they are worthwhile. How many people live and die for nothing at all!"

Dr. Rafael Medoff is the author of 15 books on Zionist and Jewish history, as well as coeditor, with Chaim I. Waxman, of the Historical Dictionary of Zionism.

The foreign and local media are telling the world that a few lunatic Jews tried to burn a church but are silent on wholesale Palestinian Authority hate.
By: Tzvi Ben-Gedalyahu
Published: June 18th, 2015 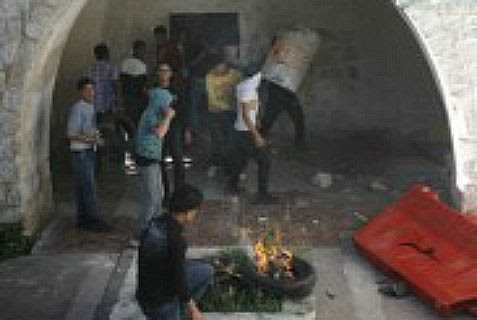 Palestinian Authority Arab terrorists hurled a firebomb at Yosef's Tomb (Kever Yosef) Wednesday night as 1,500 Jews were arriving from all over the country for prayers marking the beginning of the month of Tammuz.

The Molotov cocktail hit one of dozens of parked buses that had brought worshippers to the holy site.

No one was injured and no damage was reported, but in subsequent clashes, the IDF shot and wounded two rioters.

Like Kassam rockets that land in "open areas" and rock throwing at Jewish motorists who are not hit, the firebombing attack was reported only on the Hareidi Kikar Shabbat website.

Kever Yosef is one of the holy places specifically designated in the Oslo Accords – remember them? – that guarantees Jewish access. That ended almost 15 years ago when the Israeli government allowed the Palestinian Authority to take over the holy site, which was desecrated dozens of times before someone in the IDF finally listened to Jewish leaders in Samaria and decided that perhaps they have a right to pray there.

This is an old story that is repeated over and over, but it is far more significant today, when Israeli political and religious leaders are fighting each over who can get the biggest headline to condemn the band of Jewish idiots who tried to burn down a church on the shores of Kinneret early Thursday morning.

The condemnation was necessary and not out of proportion. Whenever a Jew desecrates a place of worship, he violates Jewish law and Israeli law and needs to be locked up.

The firebomb at Kever Yosef was not shoved to "news briefs" because of the arson. It simply was not reported at all.

About the Author: Tzvi Ben Gedalyahu is a graduate in journalism and economics from The George Washington University. He has worked as a cub reporter in rural Virginia and as senior copy editor for major Canadian metropolitan dailies. Tzvi wrote for Arutz Sheva for several years before joining the Jewish Press

or http://www.yehudalave.com/
Posted by Rabbi Yehuda Lave at 2:19 PM