Try This for a Change

Think of a positive trait you would like to master.

In order to integrate this trait, role play. Imagine that you have already changed that trait and see how this new pattern becomes a part of your everyday reality.

Be patient and practice regularly.

From Clay to Mosaic tiles

There is a very beautiful prayer we say every Yom Tov (holiday) before taking out the Sefer Torah. It contains just about everything for which a person would want to pray.

"Master of the universe, fulfill the requests of my heart for good, satisfy my desire and grant my requests for me, Your servant, and merit my spouse and family to do Your will with a complete heart. Rescue us from base desires and grant us our portion in Your Torah. Merit us that Your Divine Presence rests upon us and spread upon us a spirit of wisdom and understanding. Let it be fulfilled in us the verse that is written: And the spirit of the Almighty shall rest upon him, the spirit of wisdom and understanding, the spirit of counsel and strength, the spirit of knowledge and fear of God. And let it be Your will, Lord our God and God of our fathers, that we merit to do good deeds in Your eyes and walk in upright paths before You. Sanctify us with Your commandments in order that we merit a good and long life until the days of the Mashiach and to the life of the World to Come. Guard us from evil deeds and bad times that spread out upon the world. May kindness surround the one who trusts in the Almighty."

Many people mistakenly feel that they should only pray for big things like medical emergencies. Not so. Prayer is about creating a relationship with the Almighty; it's about understanding and appreciating the Source of all blessing. It focuses us on recognizing from where comes our good and makes it easier to ask. God is the loving Parent who wants only good for us. Knowing and focusing on God's love and His being the source of our blessing, strengthens the relationship with the Almighty. It changes us and makes us more worthy of receiving His bounty.

Prayer not only helps create the relationship with the Almighty, it keeps the relationship strong. Imagine the difficulties of asking your father or mother for help after not speaking with them for years? God will listen to us when we call out to Him. It is just easier to ask Him if you keep your relationship current.

A prayer has three components: 1) Praise of God. (He doesn't need our praises; it focuses us on to Whom we are talking.) 2) Requests. 3) Thanks. It is the height of good manners to show appreciation. A short prayer might go something like, "Almighty, Master of the Universe, Who has given me all good things, please help me find a parking space so that I do not keep people waiting. Thank You for this and for all that You have given me."

Man proposes and God disposes. (The Yiddish version: Man plans, God laughs...) Everything that God does for us is for our good ... even when the answer to our prayer is "No!" If the answer is "No" we should ask ourselves "Why?" and try to improve. Prayer focuses us on what we want out of life and what is good for us.

Here are 5 Steps to Genuine Prayer: 1) Feel God's presence. You are talking to a loving, all-powerful Being who wants to give you everything that's good. All over the world God is answering prayers because He loves His children. 2) Expect results. God has a track record. If you don't really believe God can and will help you, you're not really praying. 3) Pay attention to what God is teaching you. Everything that happens is for your good. If you are in need, realize God is teaching you something. If you trust Him, you will hear what He is telling you. 4) Get in touch with what you're really after. Know your bottom line. You're talking to the awesome Creator, so don't ask for nonsense. He wants you to grow up. 5) Being serious about what you're praying for means that you're doing everything you can to make it happen. God will lend a hand only when you put in the effort. He'll never take away your independence because that's His ultimate gift to you.

A Grandson of slaves, a boy was born in a poor neighborhood of New Orleans known as the "Back of Town."


His father abandoned the family when the child was an infant, His mother became a prostitute and the boy and his sister had to live with their grandmother. Early in life he proved to be gifted for music and with three other kids he sang in the streets of New Orleans. His first gains were the coins that were thrown to them.
A Jewish family, Karnofsky, who had immigrated from Lithuania to the USA had pity for the 7-year-old boy and brought him into their home. Initially given 'work' in the house, to feed this hungry child. There he remained and slept in this Jewish families home where, for the first time in his life he was treated with kindness and tenderness.
When he went to bed, Mrs. Karnovsky sang him a Russian Lullaby that he would sing with her.

Later, he learned to sing and play several Russian and Jewish songs. Over time, this boy became the adopted son of this family. The Karnofskys gave him money to buy his first musical instrument; as was the custom in the Jewish families. They sincerely admired his musical talent. Later, when he became a professional musician and composer, he used these Jewish melodies in compositions, such as St. James Infirmary and Go Down Moses.


The little black boy grew up and wrote a book about this Jewish family who had adopted him in 1907. In memory of this family and until the end of his life, he wore a star of David and said that in this family he had learned "how to live real life and determination."


You might recognize his name.
This little boy was called Louis "Satchmo" Armstrong. 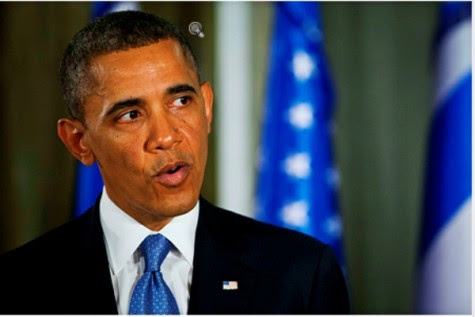 Robert S. Wistrich, the dean of historians on anti-Semitism who died last month, wrote two great books – Antisemitism: The Longest Hatred and A Lethal Obsession – that posited a nuclear-capable Iran as the greatest threat to the Jewish people since Hitler.

It's a shame that with Wistrich's untimely death the world lost a master educator who in time would have exposed a great many more people to the perniciousness of history's oldest hatred. One person in particular who could use such a tutorial is President Obama.

In his recent Atlantic interview with President Obama, Jeffrey Goldberg asked about Iran, anti-Semitism, and the nuclear bomb.

This argument is essentially a revival of the Western democracies' (wishful) thinking in the years leading up to World War II. Hitler's regime, they admitted, was anti-Semitic – but the same could be said, they noted, for other European regimes, past and present. The problem with this apology for appeasement was its failure to recognize the difference between the traditional anti-Semitism of European leaders and the Nazis' genocidal anti-Semitism.

Genocidal anti-Semitism had never been put into practice when in 1938 Neville Chamberlain ignored the potential catastrophic threat it posed. By 1945 a shocked world saw the results of a war of extermination against the Jews carried out by a modern state – a state so driven by virulent anti-Semitism that it often diverted personnel and materials from the epic military conflict in order to expedite the killing of Jews.

In 2015, however, no leader of the P5+1 group negotiating with Tehran, let alone the U.S. president, has any excuse for recklessly ignoring history and refusing to take Iran's serial genocidal threats to "wipe Israel from the map" seriously.

But is the imminent threat of Iranian nuclear capability – President Obama's proposed deal at best will delay Iran acquisition of nuclear weapons by a decade – really genocidal? In his interview, the president suggested otherwise by arguing that Iran's anti-Semitism may primarily be meant for "internal consumption," not as statecraft aimed at destroying the Jewish state. But there is nothing about Tehran's anti-Israel bombast and state-sponsored anti-Semitism that ever stops at its borders.

For evidence of Iran's intent, here is a partial list, compiled by Daniel Pipes, of declarations made by Iranian leaders this year alone – declarations the president and the P5+1 should have immediately denounced:

* Mujtaba du Al-Nour, a senior figure in the Iranian Revolutionary Guards: Iran has rockets that can reach Tel Aviv "even before the dust of rockets of the Zionists reach us."

* General Muhammad Reza Naqdi, commander of Iran's Basij militia: "Wiping Israel off the map is not up for negotiation."

In addition to the refusal of the P5+1 to demand that Iran repudiate its threat to destroy Israel, there has been no insistence that Iran cease its global anti-Semitic propaganda, which includes Holocaust denial conferences and anti-Semitic cartoon competitions. There is nothing in the framework deal demanding that the mullahs stop financing terrorist groups such as Hizbullah and Hamas within the region and as far way as South America.

President Obama remarked in his Atlantic interview: "Look, 20 years from now, I'm still going to be around, God willing. If Iran has a nuclear weapon, it's my name on this."

Neville Chamberlain learned too late that sometimes no deal is better than a horrible deal that infamously carries your name in the annals of history.

We can only hope that our president, along with German Chancellor Merkel and the other leaders of today's Europe, take a long, hard look in history's rear-view mirror and back off a deal that will allow Tehran to marry its anti-Semitic hate with nuclear-tipped ICBMS.

About the Author: Rabbi Abraham Cooper is associate dean of the Simon Wiesenthal Center; Dr. Harold Brackman, a historian, is a consultant to the center.

The doctor that had been seeing an 80-year-old woman for most of her
life finally retired.

At her next checkup, the new Doctor told her To bring a list Of
all the medicines that had been prescribed for Her.

As The young doctor was looking through these, his eyes grew wide As he
realized Grandma had a prescription for birth control Pills..
"Mrs. Smith, do you realize these are BIRTH CONTROL
Pills?
"Yes, they help me sleep at night."
"Mrs. Smith, I assure you there is absolutely NOTHING in These that
that could possibly help you
sleep!"

She reached out and Patted the young Doctor's knee...."Yes, dear, I
know that. But every morning,
I grind one up and mix it in the glass of orange juice that my 16 year
old Granddaughter drinks ..
And believe me, it definitely helps me sleep at night."
You gotta Love Grandmas.